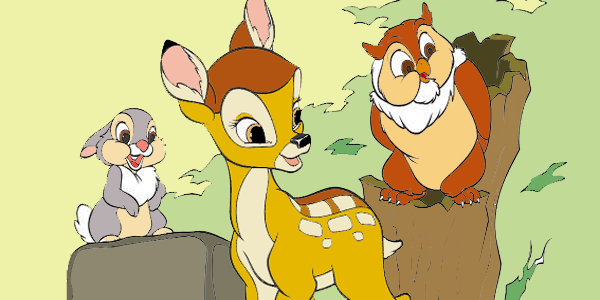 Welcome to our Bambi coloring pages.

Bambi is a 1942 American animated film produced by Walt Disney and based on the book Bambi, A Life in the Woods by Austrian author Felix Salten. The film was released by RKO Radio Pictures on August 13, 1942, and it is the fifth film in the Walt Disney Animated Classics series.

The main characters are Bambi, a white-tailed deer, his parents (the Great Prince of the forest and his unnamed mother), his friends Thumper (a pink-nosed rabbit), and Flower (a skunk), and his childhood friend and future mate, Faline. All of these can be found in our Bambi coloring pages. For the movie, Disney took the liberty of changing Bambi’s species into a white-tailed deer from his original species of roe deer, since roe deer don’t inhabit the United States, and the white-tailed deer is more familiar to Americans. This film received three Academy Award nominations for Best Sound, Best Song for Love Is a Song and Original Music Score.

In the thicket, a doe gives birth to a fawn whom she names Bambi. After he learns to walk, Bambi befriends Thumper, a young rabbit, and while learning to talk he meets Flower, a young skunk. Flower allows Bambi to call him a flower saying that he doesn’t mind at all, then the infant Bambi says Flower Pretty Flower.
Flower, Thumper and Bambi become really close friends, as you can see in our coloring pages.

One day, when Bambi has completely learned how to talk, his mother takes him to the meadow, a place that is both wonderful and frightening, Bambi’s mother warns him that out there the deer are unprotected and there are no trees are bushes to hide them, so they must be very careful for their safety. There he meets Faline, a doe-fawn and her mom Aunt Ena, and his father, the Great Prince of the Forest. It is also during this visit that Bambi has his first encounter with man, who causes all the animals to flee the meadow, initally Bambi is caught in the middle of the encounter, as he has a hard time finding his mother due to the fleeing crowd, but his father arrives just in the nick of time to get Bambi and his mother out of the meadow before a hunter can even shoot them. When Bambi asks his mom why they all ran, his mother explains Man, was in the forest.

Are you ready to hop towards our Bambi coloring pages now? Hope you’ll have a lot a fun coloring them!