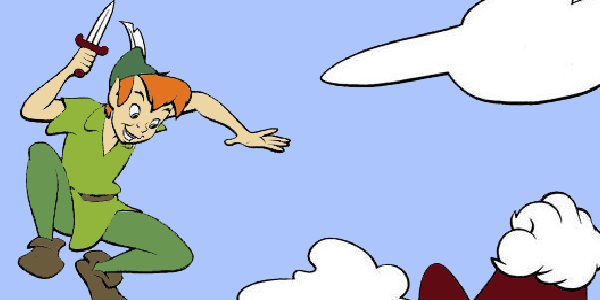 Peter Pan is a character created by Scottish novelist and playwright J. M. Barrie (1860 – 1937). A mischievous boy who can fly and magically refuses to grow up, Peter Pan spends his never-ending childhood adventuring on the small island of Neverland as the leader of his gang the Lost Boys, interacting with mermaids, Indians, fairies, and pirates, and from time to time meeting ordinary children from the world outside. In addition to two distinct works by Barrie, the character has been featured in a variety of media and merchandise, both adapting and expanding on Barrie’s works.

Peter Pan has appeared in numerous adaptations, sequels, and prequels since then, including the widely known 1953 animated feature film Walt Disney’s Peter Pan, various stage musicals (including one by Jerome Robbins, starring Cyril Ritchard and Mary Martin, filmed for television), live-action feature films Hook (1991) and Peter Pan (2003), and the authorized sequel novel Peter Pan in Scarlet (2006). He has also appeared in various works not authorized by the holders of the character’s copyright, which has lapsed in most parts of the world. See List of works based on Peter Pan.

The notion of a boy who would never grow up was based on J. M. Barrie’s older brother who died in an ice-skating accident the day before he turned 14, and thus always stayed a young boy in his mother’s mind. Ironically, the boy who wouldn’t grow up has appeared at a variety of ages. In his original appearance in The Little White Bird he was only seven days old. Although his age is not stated in Barrie’s later play and novel, his characterization is clearly years older. The book states that he has all of his baby teeth, and Barrie’s intended model for the statue of Peter that was erected in Kensington Gardens was a set of photos of Michael Llewelyn Davies taken at the age of six. Early illustrations of the character generally appeared to be that age or perhaps a few years older. In the 1953 Disney adaptation and its 2002 sequel, Peter appears to be in late childhood, between 10 and 13 years old. (The actor who provided the voice in 1953 was 15-year-old Bobby Driscoll.) In the 2003 film, Jeremy Sumpter was 13 at the time filming started, but by the end of filming he was 14 and had grown several inches taller. In the movie Hook, Peter is said to have left Neverland many years earlier, forsaking his eternal youth and aging normally. When remembering his buried past, Peter is shown as a baby, and little boy, and also a near-teenager, suggesting that the aging process does not entirely stop in Neverland until puberty or just before, or that Peter aged a little bit every time he left Neverland to come to the real world. When Peter says: I remember you being a lot bigger. in the final duel, Hook answers: to a 10-year-old I’m huge. He is portrayed by Robin Williams, who turned 40 during production of the film.