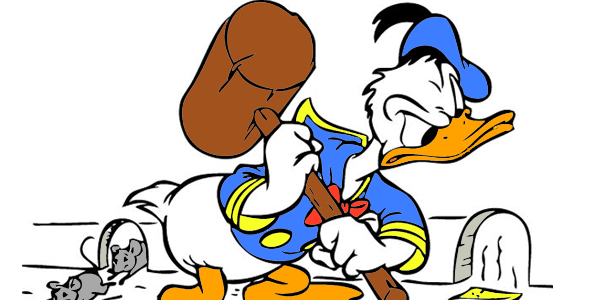 Donald Fauntleroy Duck is an American cartoon character from The Walt Disney Company. Donald is a white anthropomorphic duck with a yellow-orange bill, legs, and feet. He usually wears a sailor shirt, cap, and a red bow tie, but no trousers (except when he goes swimming). Donald’s most famous personality trait is his easily provoked and explosive temper. Donald Duck has been officially honored as the third most popular cartoon character of all time with Bugs Bunny of Warner Bros. Looney Tunes/Merrie Melodies at number two and fellow Disney creation Mickey Mouse who is number one. Donald Duck was first known as Donald Oliver Duckling.

According to the Disney canon, Donald’s birthday is officially recognized as June 9, 1934, the day his debut film, The Wise Little Hen, was released.

According to Adeytola in his introduction to The Chronological Donald – Volume 1, Donald was created by Walt Disney when he heard Clarence Nash doing his “duck” voice while reciting “Mary had a little lamb”. Mickey Mouse had lost some of his edge since becoming a role model for children and Disney wanted a character that could portray some of the more negative character traits he could no longer bestow on Mickey.

Donald Duck first appeared in the Silly Symphonies cartoon The Wise Little Hen on June 9, 1934 (though he is mentioned in a 1931 Disney storybook). Donald’s appearance in the cartoon, as created by animator Dick Lundy, is similar to his modern look—the feather and beak colors are the same, as is the blue sailor shirt and hat—but his features are more elongated, his body plumper, and his feet smaller. Donald’s personality is not developed either; in the short, he only fills the role of the unhelpful friend from the original story.

Donald’s dominant personality trait is his short temper and, in contrast, his positive look on life. Many Donald shorts start with Donald in a happy mood, without a care in the world, until something comes and spoils his day. His anger is a great cause of suffering in the duck’s life, and he has on multiple occasions got in over his head and lost competitions because of it. There are times when he fights to keep his temper, and he has succeeded a few times, but he always returns to his well known, aggressive self at the end of the day.

Donald’s aggressive nature is a double-edged sword however, and while it at times is a hindrance and even a handicap for him, it has also helped him in times of need. When faced against a threat of some kind, Donald may get frightened and even intimidated (mostly by Pete), but rather than getting scared, he gets mad and has taken up fights with ghosts, sharks, mountain goats and even the forces of nature. And, more often than not, Donald has come out on top.