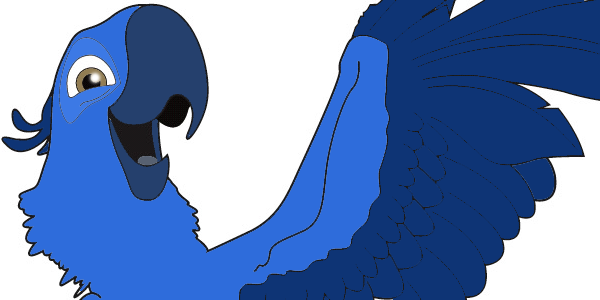 A baby Spix’s Macaw who is unable to fly and several other birds are smuggled from Rio de Janeiro to Moose Lake, Minnesota. The box containing the macaw falls to the street and is discovered by a girl named Linda (Leslie Mann), who names him “Blu”. Fifteen years later, Linda lives in a bookstore with Blu (Jesse Eisenberg). Túlio (Rodrigo Santoro), an ornithologist, reveals that Blu is the last male of his species, and he needs to mate with a female to preserve it.

Did you know that the Spix Macaw is not the only bird in our Rio coloring pages? Can you figure out which other birds you can find in between the coloring pages?

Linda takes Blu to Rio. While there, Blu meets Jewel (Anne Hathaway), a female Spix’s Macaw, who is only interested in escaping. The shelter is raided by smugglers, who are let in by their Sulphur-crested Cockatoo, Nigel (Jemaine Clement), who was posing as a sickly bird. Among them is the smuggler’s assistant Fernando (Jake T. Austin), an impoverished and orphaned boy. Blu and Jewel are captured and Nigel explains that he used to be a performing bird on a television program, but was replaced by a parakeet. Out of hatred, Nigel assists smugglers in capturing exotic birds. Blu and Jewel flee, but get lost in the jungle.

They meet a family of toucans, whose father Rafael (George Lopez), offers to take them to see his bulldog friend Luiz (Tracy Morgan) in removing the chain. Rafael also unsuccessfully attempts to teach Blu to fly. The group meets a Red-crested Cardinal named Pedro (Will.i.am) and his canary friend Nico (Jamie Foxx).

Meanwhile, Nigel recruits a group of thieving marmosets led by their king Mauro (Brian Baumgartner), to find Blu and Jewel. Linda and Tulio also try to find Blu, assisted by the repentant Fernando. Pedro and Nico take Blu and Jewel to a bird’s samba club, where Blu starts to dance, ending in a duet with Jewel. They are attacked by the marmosets, but their bird friends, including a Roseate Spoonbill they met at the samba club named Kipo (Bernardo de Paula) fend them off long enough for the five to escape.