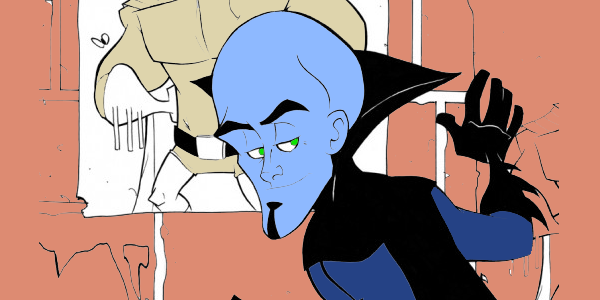 Megamind (Will Ferrell) is a super-intelligent alien who has come from a different planet and landed in the Metro City (Metrocity) Prison. Megamind has constantly battled his nemesis Metro Man (Brad Pitt) since they both arrived on Earth as infants. Consistently losing to Metro Man in his schemes to take over Metro City, Megamind believes himself destined to be the villain. On the day that Metro City dedicates a museum to their protector, Megamind and his sidekick Minion (David Cross) kidnap reporter Roxanne Ritchie (Tina Fey), and then lure Metro Man into a copper-lined room. To everyone’s surprise, Metro Man is unable to escape, and appears to be killed when Megamind’s death ray strikes him. Megamind revels in his victory, but shortly after becomes depressed, his villainy having no meaning without anyone to stop him.

While attempting to destroy the museum, he disguises himself as its curator Bernard (Ben Stiller) to hide himself from Roxanne. As he talks with her, Megamind is inspired to create a superhero by injecting a worthy target with a serum fashioned from Metro Man’s DNA, granting them Metro Man’s super-abilities. As Megamind is selecting his target, Roxanne sneaks into Megamind’s lair; in the resulting chaos, Megamind accidentally fires the serum into Hal, Roxanne’s cameraman (Jonah Hill). Taking advantage of the gullible Hal, Megamind appears to the transformed human as his “space dad”, grooming Hal into the superhero Titan (Hal’s misunderstanding of Megamind’s original name “Titan”) and preparing him to fight Megamind in the coming days. Meanwhile, Megamind has become attracted to Roxanne, and continues to date her using his Bernard disguise. Titan, also infatuated with Roxanne, becomes jealous of Bernard, while Minion, seeing Megamind losing interest in villainy, angrily leaves him. On a dinner date, Megamind’s disguise falters, leading Roxanne to dump him. Megamind, heartbroken, returns to his lair and vows to fight Tighten the next day as planned.