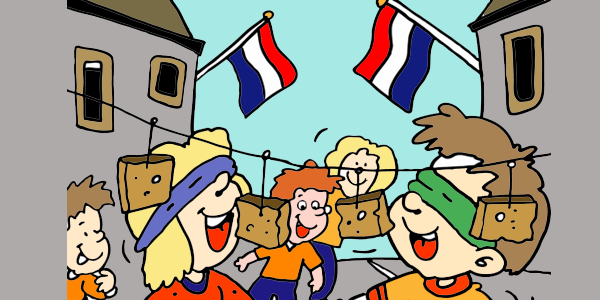 Queen’s Day is known for its “freemarket” (Dutch: vrijmarkt) all over the country, where everybody is allowed to sell things in the streets. Other activities during Queen’s Day are children’s games, individual musical performances, and music concerts. The night before Queen’s Day is celebrated too in most cities, and this is called Queen’s Night (Dutch: Koninginnenacht). The largest celebration of Queen’s Day is in Amsterdam, Queen’s Night in The Hague and Queen’s Dance (Dutch: Koninginnedans) in Rotterdam. During the celebrations as reference to the colours of the House of Orange-Nassau, people dress in the colour orange, which is sometimes called “orange craze” (Dutch: oranjegekte). A really nice wooden box with a clear lid full of wooden vegetables that children can cut up and put together over and over again. 21 cm x 5 cm x 14 cm. Suitable for ages 3 years and up.
Buy Item
TradeTracker wordpress plugin