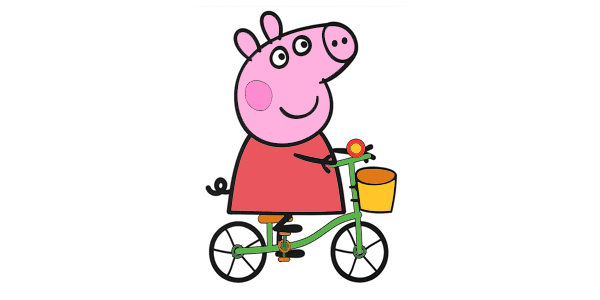 Peppa Pig is a British animated television series created directed and produced by Astley Baker Davies and distributed by eOne Entertainment. To date, three series have been aired. It is shown in 180 territories.

Peppa is a loveable, cheeky little piggy who lives with her little brother George, Mummy Pig and Daddy Pig. Peppa’s favourite things include playing games, dressing up, days out and jumping in muddy puddles. Her adventures always end happily with loud snorts of laughter.

Peppa Pig is a children’s television programme broadcasting on Channel 5/Nick Jr. in the UK and Nickelodeon/Nick Jr. in USA. Each episode is approximately 5 minutes long. The show revolves around Peppa, an anthropomorphic female pig, and her family and friends. Each of her friends is a different species of mammal. Peppa’s friends are the same age as her, and Peppa’s younger brother George’s friend Richard is the same age as him. Episodes tend to feature everyday activities such as attending playgroup, going swimming, visiting their grand parents, going to the play ground or riding bikes.

The characters wear clothes, live in houses, and drive cars, but still display some characteristics of the animals on which they are based. Peppa and her family snort like pigs during conversations, the other animals make their respective noises when they talk, with some exhibiting other characteristics, such as the Rabbit family’s enjoyment of carrots. The Rabbits are also the sole exception to the rule of human-like habitation, in that they live in a burrow in a hill, although it does have windows and is furnished in the same way as the other houses.

The first series of 52 five-minute episodes started on Channel 5 on 31 May 2004, and had its American premiere as part of Cartoon Network’s Tickle-U preschool television programming block on 22 August 2005, and Noggin in December 2007 and January 2008, re-dubbed with American voices. In the United Kingdom, it can also be seen on Nick Jr., the same with Portugal, Italy, Benelux, Scandinavia and Australia. In Taiwan, the show can be seen on Playhouse Disney. The second series of 52 episodes began on Channel 5 on Monday 4 September 2006, with Cecily Bloom replacing Lily Snowden-Fine as Peppa, amongst other cast changes. The third series started broadcasting on the Channel 5 kids block, Milkshake! on 4 May 2009 with Harley Bird replacing Cecily Bloom and Lily Snowden-Fine as Peppa. Today in the U.S., Peppa Pig currently airs on Nick Jr.