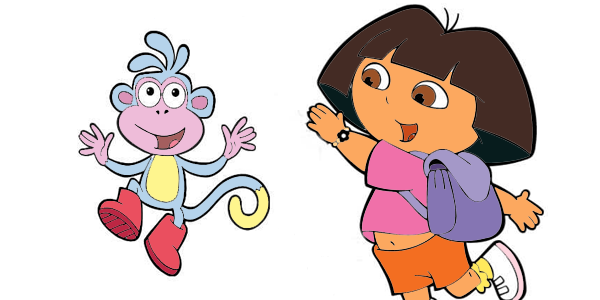 Dora the Explorer is an American animated television series created by Chris Gifford, Valerie Walsh, and Eric Weiner. Dora the Explorer became a regular series in 2000. The show is carried on the Nickelodeon cable television network, including the associated Nick Jr. channel. It aired on CBS until September 2006. A Spanish-dubbed version first aired as part of a Nick en español block on NBC Universal-owned Telemundo through September 2006; since April 2008, this version of the program has been carried on Univision as part of the Planeta U block.

Dora, the main character, is a young 7-year-old girl who embarks on a trip in every episode in order to find something or help somebody. She asks the viewers at home to help her find new ways to reach places with the help of Map. She also teaches viewers Spanish, introducing them to short words and phrases.

Dora has a positive view of the characters she meets, failing even to hold a grudge against the mischievous fox, Swiper, who continually attempts to steal items from her party. She acts against villains only when it seems that compromise is impossible, and even in these cases, fails to display actual anger. She gives others a chance to try their hands at tasks even when she herself might have an easier time with them. Dora values her family, whom she loves openly, though she spends little time indoors at home with them. She tries to introduce her traditions and customs, subtly and without compulsion, to those who are not familiar with them.
Dora is fond of Boots, who became her best friend when she saved his beloved red boots from being swiped by Swiper.

Dora enjoys sports. She played on a baseball team with Boots and her other friends and was coached by her father (who has never been depicted as having other employment). She loves and excels at soccer. Dora is also a musician, skilled at playing a wooden flute.

The character was voiced by Kathleen Herles until she was replaced by Caitlin Sanchez. Sanchez has since been replaced by Stephanie Kocka, as voicing the new pre-teen version of Dora starting in March 2011 when the new season premieres.

Dora is a Latina. Early concepts of Dora had her as a blond girl of European ancestry. The character was originally based on a niece, Lilli, of Rick Velleu, one of the creators of the show.