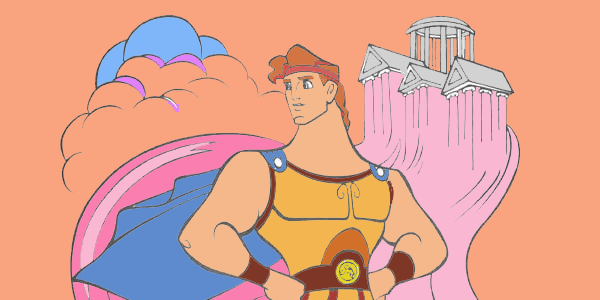 Long after Zeus, ruler of the Greek gods of Mount Olympus, defeats the Titans and locks them deep in the bowels of the earth, he and his wife Hera give birth to a son, Hercules. All the gods of Olympus celebrate Hercules’s birth except for Zeus’s jealous brother Hades, who was forced by Zeus to work as lord of the dead in the Underworld, and seeks to overthrow his brother. Hades learns from the Fates that in eighteen years, a planetary alignment will reveal the location of where the Titans are trapped, allowing him to free them and take over Olympus, but only if Hercules doesn’t interfere.

Hades sends his minions Pain and Panic to kidnap Hercules, bring him to Earth, and kill him after giving him a potion that will turn him mortal. However, Pain and Panic are unable to give Hercules the entire potion which, while still making him mortal, allows him to retain his godlike strength. Hercules is then found by a farmer and his wife, who raise him as their own son.