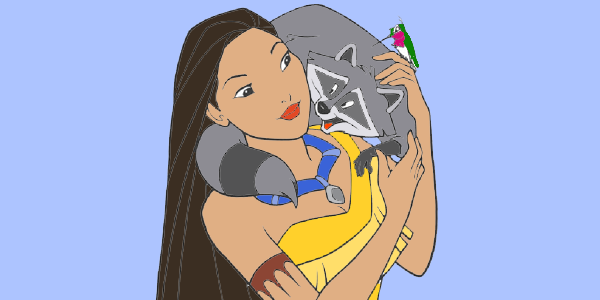 Pocahontas is one of the main characters of Disney’s 1995, thirty-third animated feature, Pocahontas, and its direct-to-video sequel, Pocahontas II: Journey to a New World. She, as well as the events she goes through, are very loosely based on the actual historical figure Matoaka, who is more popularly known by the nickname Pocahontas. The film is the first Disney film to be based on a real historic character, based on the known fact of the real historical story and also the folklore and legend that surround the Native American woman Pocahontas, and features a fictionalized account of her encounter with Englishman John Smith and the settlers that arrived from the Virginia Company.

Pocahontas (c.1595 March 21, 1617) was a Virginia Indian chief’s daughter notable for having assisted colonial settlers at Jamestown in present-day Virginia. She converted to Christianity and married the English settler John Rolfe. After they traveled to London, she became famous in the last year of her life. She was a daughter of Wahunsunacawh, better known as Chief or Emperor Powhatan (to indicate his primacy), who headed a network of tributary tribal nations in the Tidewater region of Virginia (called Tenakomakah by the Powhatan). These tribes made up what is known as the Powhatan Chiefdom and spoke a language of the Algonquian family.

Pocahontas’ name means “Little Mischief” or the “naughty one” She is based on the real historical figure, and was born into a highly sophisticated Native American culture that had some knowledge of Europeans.