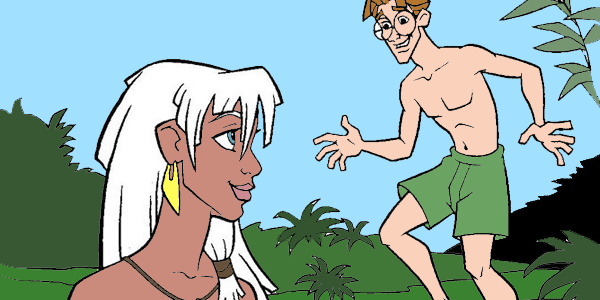 Welcome to our Atlantis Coloring pages!

The movie begins with a supposed theory of the sinking of Atlantis. A flash is seen in the ocean, followed by multiple Atlantean vehicles fleeing the area. In the capital city of Atlantis, the ground itself shakes and crumbles as a massive tidal wave approaches from the direction of the flash. As the people flee to the shelters, a young girl named Kida loses her mother (later revealed to be the queen) when the woman is lifted up into the sky and encircled by large glowing stone faces. A powerful blue force field of unknown energy rises up to cover the city, shutting out many of the fleeing Atlanteans. As the wave comes closer, the glowing of the energy field intensifies, until finally in a clash of water against the force field the island sinks and the waves cover the island, putting it underwater. In our Atlantis coloring pages you can discover this underwater city.

The main story begins thousands of years later in 1914, when Milo James Thatch (Michael J. Fox), an aspiring young cartographer/linguist/explorer working in the boiler room at the Smithsonian Institution in Washington D.C., believes he has found the secret to the location of Atlantis through a manuscript called the Sheppard’s Journal. Milo can also be found in our Atlantis coloring pages.) When his request to lead an expedition is denied by the Institution’s board, he finds himself contacted by millionaire Preston B. Whitmore (John Mahoney), who reveals he was a friend of Milo’s grandfather, Thaddeus Thatch, who had originally located the Journal. He had given it to Whitmore, wanting him to give it to Milo when he was ready for it. Whitmore requests that Milo become part of a team to search for Atlantis as their linguist expert, which Milo eagerly agrees to. Milo is introduced to the specialists on the team, led by Commander Rourke (James Garner) and his second-in-command Helga Sinclair (Claudia Christian). The team includes Italian demolitions expert Vincenzo Vinny Santorini (Don Novello), crazed French geologist Gaetan Mole Molire (Corey Burton), medical officer Dr. Joshua Sweet (Phil Morris), tomboy mechanic Audrey Ramirez (Jacqueline Obradors), redneck cook Jebidiah Allerdyce Cookie Farnsworth (Jim Varney), and elderly cynical communications expert Wilhelmina Packard (Florence Stanley). The team initially teases and plays tricks on Milo but slowly warm up to him over the adventure. You can color everyone of the team with our Atlantis coloring pages!

Are you ready to color our Atlantis coloring pages?