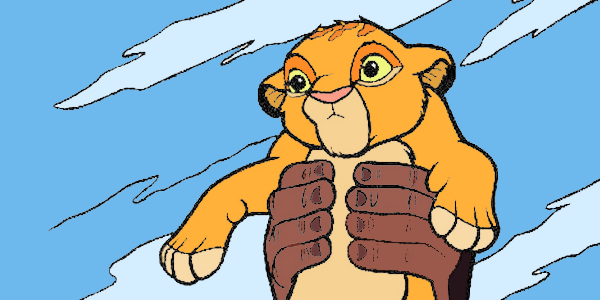 The film opens with a gathering of a large number of animals around Pride Rock in Africa, where a wise mandrill, Rafiki, presents Simba, the newborn son of the lion King and Queen, Mufasa and Sarabi. The only resident of the Pride Lands who is displeased with the birth of this heir is Mufasa’s younger brother, Scar, who seeks the throne for himself. As Simba grows up, he is taught about the Pride Lands, including the neighboring Outlands, ruled by ruthless hyenas and off limits for residents of the Pride Lands. Simba, however, turns out to be a colorful prankster who would rather play with his best friend, Nala, than listen to the lessons Mufasa’s hornbill majordomo, Zazu, attempts to teach him. When Scar tells Simba about an elephant graveyard in the Outlands, Simba and Nala outsmart Zazu and venture out into the Outlands where they come upon three hyenas, Shenzi, Banzai and Ed, who try to kill them in the ensuing chase. Mufasa arrives to rescue the cubs in time, after being alerted by Zazu, and talks with Simba about how he shouldn’t go looking for trouble just to show how brave he is. Mufasa then teaches Simba about the stars, saying that they represent all the great kings of the past that watch down on them. He tells Simba that whenever he feels alone, to remember that they are there to guide him.

Meanwhile, Scar plots with the hyenas to kill both Mufasa and Simba and to take over the Pride Lands. On Scar’s orders, the hyenas trap Simba in a narrow gorge during a dangerous stampede of wildebeest. Scar informs Mufasa of Simba’s predicament, and Mufasa successfully rescues Simba, throwing him clear of the gorge. However, as Mufasa attempts to exit the gorge himself by climbing its walls, Scar refuses his request for assistance, and throws him back into the gorge, resulting in his death. After finding his father’s corpse, is tricked by Scar into believing that Mufasa’s death resulted from Simba’s carelessness. Ashamed, Simba flees the Pride Lands, intending never to return. Scar orders the hyenas to follow and kill Simba, but Simba escapes. In Simba’s absence, Scar proclaims him dead, and declares himself as ruler of the Pride Lands.