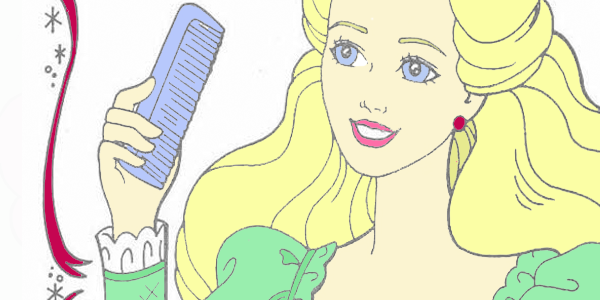 Barbie is a fashion doll manufactured by the American toy-company Mattel, Inc. and launched in March 1959. American businesswoman Ruth Handler is credited with the creation of the doll using a German doll called Bild Lilli as her inspiration.

Barbie is the figurehead of a brand of Mattel dolls and accessories, including other family members and collectible dolls. Barbie has been an important part of the toy fashion doll market for fifty years, and has been the subject of numerous controversies and lawsuits, often involving parody of the doll and her lifestyle.

Barbie’s full name is Barbra Millicent Roberts. In a series of novels published by Random House in the 1960s, her parents’ names are given as George and Margaret Roberts from the fictional town of Willows, Wisconsin. In the Random House novels, Barbie attended Willows High School, while in the Generation Girl books published by Golden Books in 1999 she attended the fictional Manhattan International High School in New York City (based on the real-life Stuyvesant High School).

She has an on-off romantic relationship with her boyfriend Ken (Ken Carson), who first appeared in 1961. A news release from Mattel in February 2004 announced that Barbie and Ken had decided to split up, but in February 2006 they were hoping to rekindle their relationship after Ken had a makeover.
Barbie and Ken can be seen and colored together in our Barbie coloring pages, don’t they make a lovely couple?

Barbie has had over 40 pets including cats and dogs, horses, a panda, a lion cub, and a zebra. You can see some of her pets in the Barbie coloring pages. She has owned a wide range of vehicles, including pink Corvette convertibles, trailers and jeeps. She also holds a pilot’s license, and operates commercial airliners in addition to serving as a flight attendant. Barbie’s careers are designed to show that women can take on a variety of roles in life, and the doll has been sold with a wide range of titles including Miss Astronaut Barbie (1965), Doctor Barbie (1988) and Nascar Barbie (1998).

Mattel has created a range of companions for Barbie, including Hispanic Teresa, Midge, African American Christie and Steven (Christie’s boyfriend). Barbie’s siblings and cousins were also created including Skipper, Todd (Stacie’s twin brother), Stacie (Todd’s twin sister), Kelly, Krissy, and Francie. Barbie was friendly with Blaine, an Australian surfer, during her split with Ken in 2004.

Now I believe you’ll have plenty of coloring to do with our Barbie coloring pages!