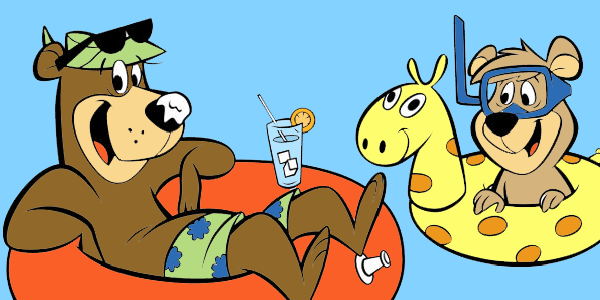 The Yogi Bear Show is an animated television series produced by Hanna-Barbera Productions about a fast-talking picnic basket stealing bear named Yogi. The show debuted in syndication on January 30 and ran for 33 episodes until December 30 in 1961 and included two segments, Snagglepuss and Yakky Doodle. The show only had a two year production run.

Yogi Bear is a 2010 American live-action film adaptation of the Hanna-Barbera cartoon series The Yogi Bear Show directed by Eric Brevig. The film stars Dan Aykroyd, Justin Timberlake, Tom Cavanagh, Anna Faris, T. J. Miller, Nate Corddry, and Andrew Daly. The film was originally slated for release on June 25, 2010, but was pushed back to December 17, 2010. It was distributed by Warner Bros. with Hanna-Barbera serving as a co-producer. It is the first film development of a Hanna-Barbera property produced without the assistance of William Hanna and Joseph Barbera, who died in 2001 and 2006 respectively. The film tells the story of Yogi Bear as he tries to save his park from being logged. Principal photography began in November 2009. It was preceded by the 3D short Rabid Rider, starring Wile E. Coyote and Road Runner.

Yogi (voiced by Dan Aykroyd) and Boo Boo (voiced by Justin Timberlake) are two brown bears who have a penchant for stealing picnic baskets from visitors to Jellystone Park, while park rangers Smith (Tom Cavanaugh) and Jones (T. J. Miller) try to prevent them from doing so. Meanwhile, Mayor Brown (Andrew Daly) realizes that his city is facing a financial crisis due to profligate spending on his part. To solve it and fund his election campaign to be the next state governor, the mayor decides to “find some place losing money so he can earn it”, and he picks Jellystone, the park where the bears live. The park is selected as a logging site, and Jellystone is shut down. Now seeing that their home is in danger of being destroyed, it’s up to Yogi and Boo Boo, along with Ranger Smith and a documentary-shooter named Rachel (Anna Faris), to save the park.