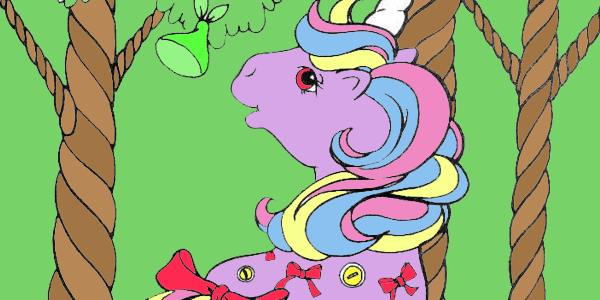 My Little Pony is a brand of toy ponies marketed primarily to young women and children and produced by the toy manufacturer Hasbro. These ponies can be identified by their colorful bodies and manes, and typically a unique symbol or series of symbols on one or both sides of their haunches. Accordingly, the ponies are named after the symbols on their haunches.

Following the related My Pretty Pony toy, introduced in 1981, My Little Pony was launched in 1983. The line became popular during the 80s. The original toy line ran from 1983 to 1995 (1992 in the U.S.) and inspired animated specials, including an animated feature length movie and three animated television series. The brand was relaunched between 1997 and 2003 (1999 in the U.S.), and then fully relaunched globally in 2003. My Little Pony celebrated its 25th Anniversary in 2008.

The original line of My Little Pony began with Earth Ponies in 1982: plump colorful ponies that have a group of symbols on their haunches representing their names. The original earth ponies had flat feet. Later My Little Ponies would have concave feet, more closely resembling actual horse feet. The Ponies were later followed by Pegasi and Unicorns. Flutter Ponies were much smaller and thinner than Pegasus Ponies and had fragile wings that featured a “fluttering” action. Windy Wing and Summer Wing Ponies were even smaller in size compared to the Flutter Ponies, but were proportioned in a similar way, and had larger wings. Finally, Sea Ponies loosely resembled the mythological hippocampus. There were also male ponies (“Big Brother Ponies”) that had slightly larger bodies and feathered hooves like Clydesdale horses.

Many different sets of Little Ponies were produced, starting with the Rainbow Ponies (which all sported rainbow-colored manes and tails) in 1983. Other variations included the So-Soft Ponies (which were entirely covered in flocking), Twinkle-Eyed Ponies (with small rhinestones in place of the eyes), Twice As Fancy Ponies (with patterns covering most of the body), Brush n’ Grow Ponies (which had a longer-than-usual tail stored inside the body that could be drawn out through brushing) and Baby Ponies, which were smaller versions of their mothers.