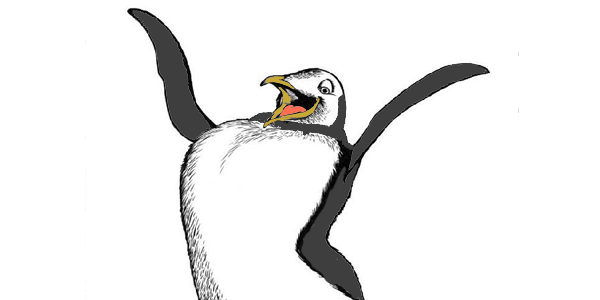 Happy Feet is a 2006 American-Australian computer-animated family film with music, directed and co-written by George Miller. It was produced at Sydney-based visual effects and animation studio Animal Logic for Warner Bros., Village Roadshow Pictures and Kingdom Feature Productions and was released in North America on November 17, 2006. It is the first animated feature film produced by Kennedy Miller in association with visual effects/design company Animal Logic.

Every penguin sings a unique song called a “heartsong” to attract a mate. If the male penguin’s heartsong matches the female’s song, the two penguins mate. A penguin named Norma Jean sings the song “Kiss”, whereupon a male penguin named Memphis sings “Heartbreak Hotel”. Norma Jean chooses him as her mate. Norma Jean lays an egg, which is left with Memphis while Norma Jean leaves with the other females to fish. While the males struggle through the harsh winter, Memphis accidentally drops the egg, briefly exposing it to the freezing Antarctic temperatures. The resulting chick – the film’s protagonist, Mumble (Elizabeth Daily) – has blue eyes, ever-lasting down feathers, and a terrible singing voice. However, Mumble has a talent that no other penguin has ever seen before: tap dancing. One day Mumble wanders into a secluded area, where he is free to dance without any complaints. Mumble is interrupted when Boss Skua and his posse Dino, Frankie, and Vinnie attempt to eat him. Mumble stalls by asking the leader of the pack about a yellow band that is attached to his right ankle. The Boss Skua tells Mumble that he had been abducted by “aliens”. Mumble narrowly escapes the hungry birds by falling into a crevice.

Mumble grows into an adult (Elijah Wood), still half-covered in fluffy down. Mumble joins his class graduates on their first trip into the ocean, where they find a large iceberg to rest on. After interrupting the graduates’ song, Mumble is forced to leave, and finds a smaller iceberg. A leopard seal chases him off the iceberg. After escaping the leopard seal, he befriends a small group of bachelors which are Adele Penguins who form a club called “the Amigos”: the leader Ramon, the brothers Raul and Nestor, and twin brothers Rinaldo and Lombardo. The Amigos quickly embrace Mumble’s dance moves and assimilate him into their misfit group. Mumble’s joy is cut short when he accidentally starts an avalanche and causes a hidden human excavator to tumble out from a glacier. Driven by curiosity, he sets out to find the “aliens” responsible for the machine.

What are you waiting for? Scroll down to our Happy Feet coloring pages! We’ve got some really nice coloring pages, so I’m sure you’ll want to get there quickly now!
Have fun coloring!