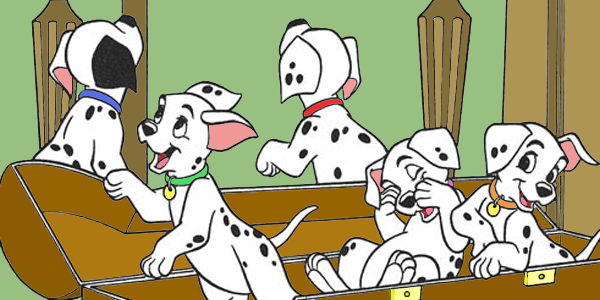 Welcome to our 101 Dalmatians coloring pages!

On this page you can find some 101 Dalmatians coloring pages from scenes from the actual film.
The film features Rod Taylor as the voice of Pongo, the first of the Dalmatians, and Betty Lou Gerson as the voice of the villainous Cruella de Vil. The plot centers on the fate of the kidnapped puppies of Pongo and Perdita.

Pongo is a dalmatian that lives in a London bachelor flat with his owner Roger Radcliffe, a songwriter. Bored with bachelor life, Pongo decides to find a wife for Roger and a mate for himself. While watching various female dog-human pairs out the window, he spots the perfect couple, a woman named Anita and her female dalmatian, Perdita. He quickly gets Roger out of the house and drags him through the park to arrange a meeting. Pongo accidentally causes both Roger and Anita to fall into a pond, but it works out well as the couple falls in love. Both the human couple and the dog couple marry.

Later, Perdita gives birth to 15 puppies. You can find all of these puppies in our 101 Dalmatians coloring pages!
One of the puppies almost dies, but Roger is able to revive it by rubbing it in a towel (because of which, they would name the pup, Lucky). That same night, they are visited by Cruella De Vil, a wealthy former schoolmate of Anita’s. She offers to buy the entire litter of puppies for a large sum, but Roger says they are not selling any of the puppies. Weeks later, she hires Jasper and Horace Badun to steal all of the puppies. When Scotland Yard is unable to prove she stole them or find the puppies, Pongo and Perdita use the Twilight Bark, normally a canine gossip line, to ask for help from the other dogs in England.
country so they can keep all 101 Dalmatians.