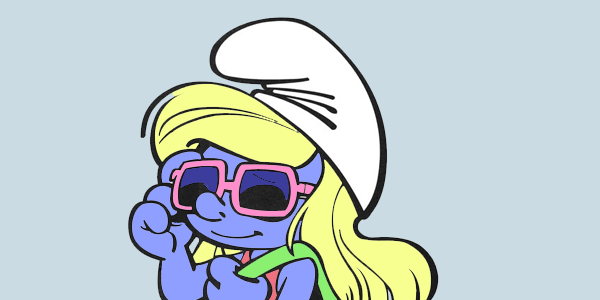 The Smurfs is a comic and television franchise centered on a group of small blue fictional creatures called Smurfs, created and first introduced as a series of comic strips by the Belgian cartoonist Peyo (pen name of Pierre Culliford) on October 23, 1958. The original term and the accompanying language came during a meal Peyo was having with his colleague and friend Andre Franquin at the Belgian Coast. Having momentarily forgotten the word salt, Peyo asked him (in French) to pass the schtroumpf. Franquin jokingly replied: Here’s the Schtroumpf — when you are done schtroumpfing, schtroumpf it back… and the two spent the rest of that weekend speaking in schtroumpf language”. The name was later translated into Dutch as Smurf, which was adopted in English.

Are you getting curious to see the coloring pages yet? Well, there’s some more reading you’ll have to do first:

The storylines tend to be simple tales of bold adventure. The cast has a simple structure as well: almost all the characters look essentially alike — mostly male, very short (3 apples high), with blue skin, white trousers with a hole for their short tails, white hat in the style of a Phrygian cap, and sometimes some additional accessory that identifies a personality. (For example, Handy Smurf wears overalls instead of the standard trousers, a brimmed hat, and a pencil above his ear). Smurfs can walk and run, but often move by skipping on both feet. They love to eat sarsaparilla (a species of Smilax) leaves, whose berries the Smurfs naturally call smurfberries (the smurfberries appear only in the cartoon; in the original comics, the Smurfs only eat the leaves from the sarsaparilla).

The Smurfs fulfill simple archetypes of everyday people: Lazy Smurf, Grouchy Smurf, Brainy Smurf, and so on. All Smurfs, with the exception of Papa, Baby, Smurfette, Nanny and Grandpa, are said to be 100 years old. There were originally 99 Smurfs, but this number increased as new Smurf characters appeared, such as Sassette and Nanny. All of the original Smurfs were male; later female additions are Smurfette and Sassette – Smurfette being Gargamel’s creation, while Sassette was created by the Smurflings. You can find a lot of these Smurflings in our The Smurfs coloring pages! Can you recognize who’s who?

Now that you’ve read all about them, I’m sure you’re ready to start coloring our coloring pages, so it’s time to scroll down to our The Smurfs coloring pages and have a smurf-tastic time!