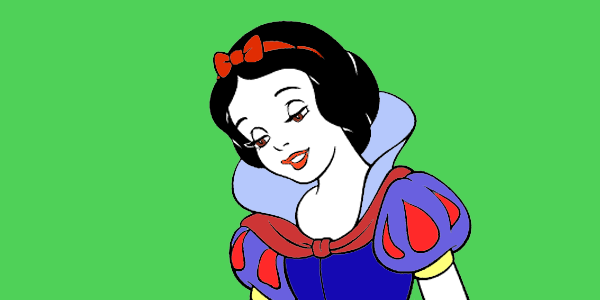 Snow White is a beautiful and young princess born to her mother, who is later deceased. Her father married again to let Snow White have a motherly figure. Soon, Snow White’s father died. Her stepmother, The Evil Queen, is very jealous of her beauty and forces her into slavery. But Snow White remains pure hearted, innocent, and a bit naive, but she never loses faith that one day her true love will come and take her away. She is always cheerful and kind, no matter how horribly the Queen treats her.

She seems to be an optimist, who will always see the bottle half full, no matter how bad things may seem. As a born dreamer, she loves helping people less fortunate than herself and never judges others by the way they look, sound, etc. And with a kind, gentle and feminine nature, she follows her heart and does what she feels is the right thing even if it can lead her into trouble. For example, she helps a suspicious, ugly old hag (who was actually the Evil Queen in disguise) by bringing her into the cottage after Grumpy told her not to let anyone in to protect herself.

She sees the beauty in everyone and everything, almost to a fault, but through it all she’s a good person with a huge heart and a motherly soul that can charm anyone, even Grumpy.