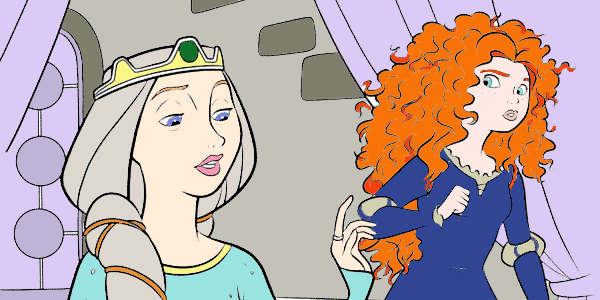 In Brave, set in the highlands of 10th century Scotland, a skilled archer named Merida defies an age-old custom, causing chaos in her kingdom. After consulting a witch for help, her family becomes cursed and Merida is forced to undo the spell herself before it is too late.

In the Scottish kingdom of DunBroch, King Fergus presents his young daughter, Merida, with a bow and arrow for her birthday, to the discomfort of Merida’s mother, Queen Elinor. During their outing, Merida briefly encountered a will-o’-the-wisp before returning to her parents as a giant demon bear named Mor’du attacks the family. Elinor and Merida escape while Fergus fights off the bear alongside his men at the cost of his left leg. Years later, Elinor, who has since given birth to identical triplet boys, teaches Merida in the ways of the court, such as playing an instrument and proper manners. However, as she and her mother became distant over the years, Merida prefers to practice her archery and explore the kingdom on her horse, Angus. Eventually, she learns that she is to be married to one of the first born sons from the clans in alliance with her father’s: Macintosh, MacGuffin, and Dingwall. Though Elinor attempts to convince her through an old tragic story of a king’s wayward son who broke ties with his three brothers and brought an end to their kingdom, Merida still dislike the arranged marriage.

So can you help Merida by giving her some color in these Brave coloring pages?