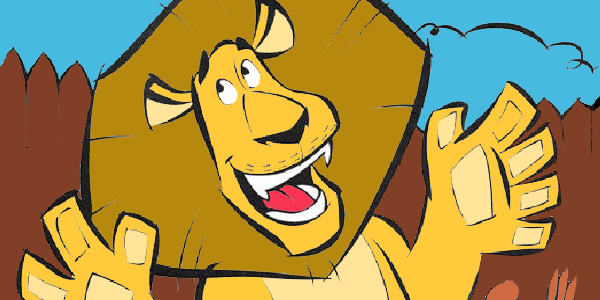 As a cub, Alex the Lion was called Alakay and was the son of Zuba, the alpha lion. Though Zuba tries to teach Alakay to be a hunter, the cub is more interested in dancing, and is captured by poachers when Makunga, Zuba’s rival, challenges Zuba to a fight for the position of alpha lion. Alakay is forced into a crate, and though Zuba tries to rescue his son, he is shot in the ear and fails. The crate falls into the ocean where it drifts to New York. There, Alakay is renamed Alex and sent to the Central Park Zoo where he grew up, meeting Marty, Melman, and Gloria. The events of the first film are then described through a series of news flashes.

In the present time, Alex, Marty, Melman, Gloria, King Julien, Maurice, the chimpanzees, Skipper and his fellow penguins board a repaired airplane in the hopes of using it to fly back to New York. Mort tries to board the plane but King Julien doesn’t want him on board and locks him outside. The plane takes off and starts with a relaxing journey. Alex later spots Mort clinging to the wing of the plane and waves to him (causing Mort to wave back and fall off the wing into the sea). The plane soon ends up crash-landing in continental Africa when it runs out of fuel. In Africa the animals are amazed to find more of their kind. Alex is reunited with Zuba and his mother. Marty quickly fits in with a herd of zebra who all look, sound, and talk exactly like him. Melman takes on the position of witch doctor amongst the animals. Gloria, interested in finding a mate, attracts the attention of a smooth-talking but shallow hippo named Moto Moto.

Meanwhile, the penguins set about repairing the plane. They carjack several jeeps from New Yorkers on vacation under Operation Tourist Trap, leaving the tourists stranded and lost in the jungle. Taking charge of the group is Nana, a tough old woman known for having beaten up Alex before he was first shipped out of New York in the first film, reminding them that they are New Yorkers and survivors.

Unfortunately, life in Africa is not as wonderful as it first seemed. Makunga, still determined to take the position of alpha lion, reminds Zuba that Alex must complete a traditional lion coming-of-age challenge that he did not complete. Alex, thinking that the challenge is a dance contest (it is actually a fight) competes against the strongest lion, Teetsie (who was recommended by Makunga) and loses quickly. To avoid being forced to banish his own son for failing, Zuba relinquishes his title as Alpha lion. Makunga immediately takes the position and banishes Alex and his family, much to Zuba’s anger at Alex.

Marty, meanwhile, begins to feel upset that all of the zebras are exactly the same as him, leaving him with nothing unique. Melman is happy as a witch doctor until he learns that he has the same spot that had apparently caused the previous witch doctor to die. Melman is also upset about Gloria dating Moto Moto, as Melman has secretly loved her for a long time. Gloria goes on a date with Moto Moto, in a lake, and quickly realizes that he only loves her for her body.

The next day, the animals are in a panic when they discover that the watering hole has dried up. Determined to make up for his earlier failure, Alex decides to risk being shot by hunters and leave the Reserve to discover what happened. Along the way, he makes amends with Marty by being able to pick his friend out of the herd of zebras. The pair discovers that the stranded New Yorkers, under the instruction of Nana, have dammed the river and built a primitive civilization. Alex is captured and Marty runs for help. Meanwhile, Zuba hears what Alex did and goes to rescue him.