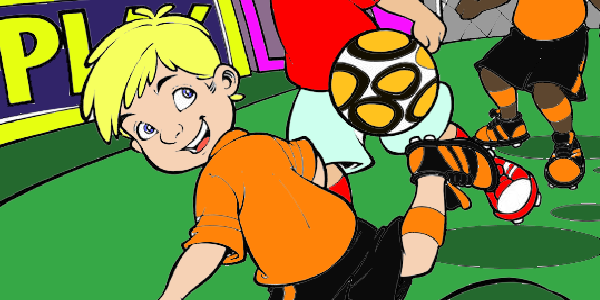 Association football, more commonly known as football or soccer, is a sport played between two teams of eleven players with a spherical ball. At the turn of the 21st century, the game was played by over 250 million players in over 200 countries, making it the world’s most popular sport. The game is played on a rectangular field of grass or green artificial turf, with a goal in the middle of each of the short ends. The object of the game is to score by driving the ball into the opposing goal.

In general play, the goalkeepers are the only players allowed to touch the ball with their hands or arms (unless the ball is carried out of play, where the field players are required to re-start by a throw-in of the game ball), while the field players typically use their feet to kick the ball into position, occasionally using their torso or head to intercept a ball in midair. The team that scores the most goals by the end of the match wins. If the score is tied at the end of the game, either a draw is declared or the game goes into extra time and/or a penalty shootout, depending on the format of the competition. The Laws of the Game were originally codified in England by the Football Association in 1863 and have evolved since then. Association football is governed internationally by FIFA – Fédération Internationale de Football Association (English: International Federation of Association Football), which organises the FIFA World Cup every four years. Now you can show how the game should look like in these soccer coloring pages