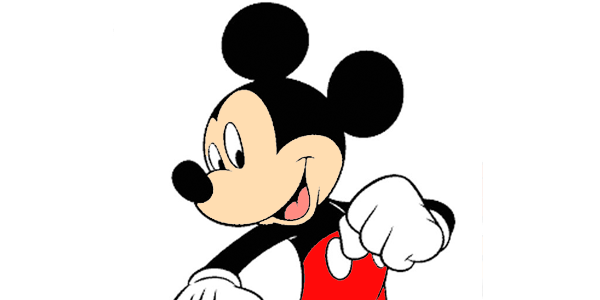 Mickey Mouse is a very famous Walt Disney character. He’s been on tv many times, in different shows like Mickey Mouse Works, Disney’s House of Mouse and Mickey Mouse Clubhouse. He’s often together with some of his friends like Goofy and Donald Duck, but also with one of his enemies, Bad Pete!!!

Mickey Mouse was created as a replacement for Oswald the Lucky Rabbit, an earlier cartoon character created by the Disney studio for Charles Mintz of Universal Studios.

When Disney asked for a larger amount for his budget for the popular Oswald series, Mintz announced that Disney could keep doing the Oswald series, as long as he agreed to a budget cut and went on the payroll. Mintz owned Oswald and thought he had Disney over a barrel. Angrily, Disney refused the deal and returned to produce the final Oswald cartoons he contractually owed Mintz. Disney was dismayed at the betrayal by his staff, but determined to restart from scratch. The new Disney Studio initially consisted of animator Ub Iwerks and a loyal apprentice artist, Les Clark. One lesson Disney learned from the experience was to thereafter always make sure that he owned all rights to the characters produced by his company.

In the spring of 1928, Disney asked Ub Iwerks to start drawing up new character ideas. Iwerks tried sketches of various animals, such as dogs and cats, but none of these appealed to Disney. A female cow and male horse were also rejected. They would later turn up as Clarabelle Cow and Horace Horsecollar. (A male frog, also rejected, would later show up in Iwerks’ own Flip the Frog series.) Walt Disney got the inspiration for Mickey Mouse from his old pet mouse he used to have on his farm. In 1925, Hugh Harman drew some sketches of mice around a photograph of Walt Disney. These inspired Ub Iwerks to create a new mouse character for Disney. Mortimer Mouse had been Disney’s original name for the character before his wife, Lillian, convinced him to change it, and ultimately Mickey Mouse came to be. Actor Mickey Rooney has claimed that, during his Mickey McGuire days, he met cartoonist Walt Disney at the Warner Brothers studio, and that Disney was inspired to name Mickey Mouse after him.