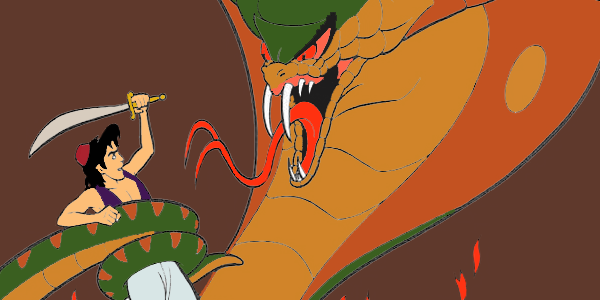 Welcome to our Aladdin coloring pages.

Aladdin is a 1992 American animated adventure film produced by Walt Disney Feature Animation and released by Walt Disney Pictures. Aladdin was the 31st animated feature in the Walt Disney Animated Classics series, and was part of the Disney film era known as the Disney Renaissance. The film was directed by John Musker and Ron Clements, and is based on the Arab folktale of Aladdin and the magic lamp from One Thousand and One Nights. The voice cast features Scott Weinger, Jonathan Freeman, Robin Williams, Linda Larkin, Frank Welker, Gilbert Gottfried, and Douglas Seale.

Jafar, Grand Vizier to the Sultan of the fictional kingdom of Agrabah, is attempting to access the Cave of Wonders for a magical oil lamp containing a genie. After seeing a petty thief’s failed attempt to enter the cave, he and his talking parrot, Iago, learn that only a Diamond in the Rough can enter the cave, or anyone accompanied by him.

Between our Aladdin coloring pages, there is one coloring page in which it looks like there are a lot of diamonds in the sky around Aladdin. These diamonds are actually stars.

Jasmine, the Sultan’s daughter, frustrated with having her life lived for her and the obligation of marriage, escapes the palace and goes to Agrabah’s marketplace. There she meets street rat Aladdin and his monkey, Abu. Jafar uses a machine to discover that Aladdin is the diamond in the rough, and has him captured. Jasmine orders him released, but Jafar lies, telling her Aladdin had already been executed.

Did you know that in our Aladdin coloring pages you can find Jasmine, Aladdin, Abu and even Jafar?!

Let’s get started on our Aladdin coloring pages right now!