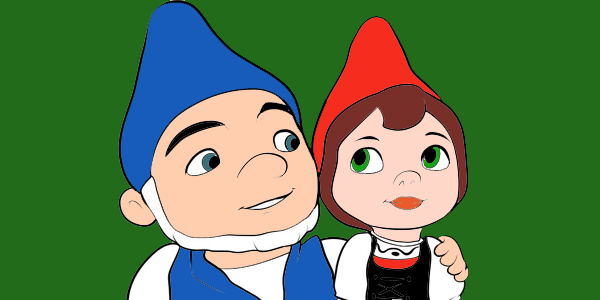 Gnomeo & Juliet is a 2011 animated family film based on William Shakespeare’s play Romeo and Juliet. The film is directed by Kelly Asbury, and the two main characters are voiced by James McAvoy and Emily Blunt. The film was released on February 11, 2011.

Mrs. Montague and Mr. Capulet (Julie Walters and Richard Wilson) are two eldery people who despise each other. When they leave the garden, objects come alive in both their gardens. The Montague garden is filled with blue garden gnomes, and the Capulet garden houses red garden gnomes. Later, both blue and red gnomes attend a lawnmower race. Representing the blues is Gnomeo (James McAvoy) and representing the reds is Tybalt (Jason Statham). During the race, it looks like Gnomeo is winning; however, Tybalt cheats and wins the race, destroying Gnomeo’s lawnmower. Gnomeo and his best friend Benny (Matt Lucas) insult Tybalt for cheating, but Tybalt ignores them.

Later that night, Gnomeo and Benny, wanting revenge, infiltrate the red garden in disguise, intending to spray the reds’ lawnmower with blue spray paint. With Tybalt sleeping and Tybalt’s best friend, Fawn (Ozzy Osbourne), playing cards with small red gnomes, it looks like there are no flaws in their plan, until Benny foolishly sprays Tybalt’s well and accidentally triggers a security light in the process, alerting the red gnomes to attack. Fortunately, both escape; however, Gnomeo ends up in a different garden. He bumps into a disguised Juliet (Emily Blunt), the daughter of Lord Redbrick (Michael Caine). Juliet is looking for the last remaining orchid in the greenhouse, planning to use it to beautify the red garden. Gnomeo is intrigued by her, and reaches for the orchid as she is about to complete the garden, and they fall in love in the process. During this time, they discover they are from opposing clans. When they both go back to their gardens, Juliet tells her friend Nanette (Ashley Jensen) about her newfound love, much to her surprise. Nanette states that the relationship is romantically tragic.

Gnomeo and Juliet then have secret meetings in a secret garden, where they meet a pink plastic flamingo named Featherstone (Jim Cummings). He supports and encourages their love, and the two begin to meet regularly. Though when the two of them are getting ready for a date, Juliet’s father introduces her to Paris (Stephen Merchant), a red gnome that Lynette has fallen for, though Juliet manages to get away.
Later, when the two return back to their gardens, Gnomeo finds his mother (Maggie Smith), who is distraught after the reds infiltrated the garden and destroyed the plant Gnomeo’s deceased father planted. The blues want Gnomeo to take revenge on the reds, and he realizes that he cannot refuse unless he tells his secret. He tunnels underneath to reach the red garden, but just as he is about to spray the prized flowers of the reds, Juliet sees him. He backs out suddenly, telling Benny that the nozzle on the spraying bottle was jammed.
When he and Juliet meet up again, they briefly argue until Featherstone stops them, telling them that other peoples’ hate destroyed his love.