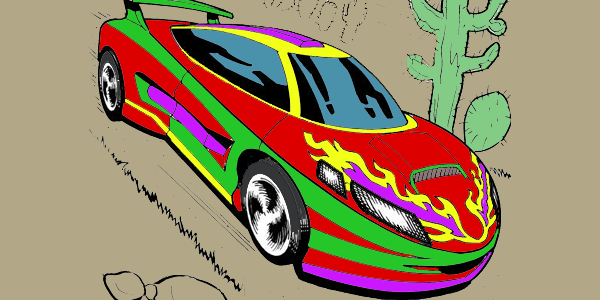 Hot Wheels are die-cast model vehicles manufactured by Mattel and were introduced on September 7, 1968. Originally the cars and trucks were manufactured to approximately 1:64 scale and designed to be used on associated Hot Wheels track sets. By 1972, however, a series of 1:43 scale Gran Toros made by Mebetoys in Milan, Italy, were introduced. More recently, a range of highly detailed adult collector vehicles, including replicas of NASCAR and Formula One cars, have found success. Despite the forays into larger scales, the brand remains most famous for the small scale free-rolling models of custom hot rods and muscle cars it has produced since the range first appeared. Roughly 10,000 or more different models of Hot Wheel Cars have been produced over the years.

Hot Wheel Vehicles are authorized by the car makers General Motors, Ford Motor Company, and Chrysler Motors. Other car makers like Ferrari, Mazda, and Toyota have licensed Hot Wheels to make a scale model of their cars.

At Mattel’s Hot Wheel design center, the blueprint’s design measurements and dimensions were scaled down to conform to a model car that is 1/64 the size of a real car. Then a mock-up of the car was produced in plastic and evaluated. After this process, the mock-up became a die cast metal mock up, which was evaluated again. After these processes were complete, the final version of the car was then manufactured.
Welcome to our Hot Wheels coloring pages!
On this page you can find some very nice Hot Wheels coloring pages which you can color as you’d like, but you can also find some very interesting information about Hot Wheels.

For older scale models, the 1968 Chevy Nova for example, the model maker uses blueprints from General Motors and also studies car brochures of that model year.

Larry Wood, the head of the Hot Wheels division (now retired), had been with the Mattel/Hot Wheels team since 1969. He originally worked for General Motors as a designer.