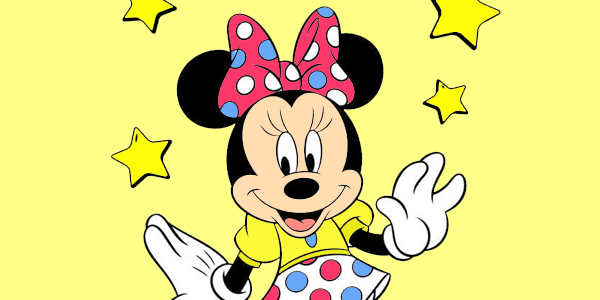 Welcome to our Minnie Mouse coloring pages. Minnie Mouse is an animated character created by The Walt Disney Company. The comic strip story The Gleam (published January 19-May 2, 1942) by Merrill De Maris and Floyd Gottfredson first gave her full name as Minerva Mouse. Minnie is a V.I.P character of the Mickey Mouse Club. Both Minnie and Mickey were created in 1928.

In 1928, Walt Disney and Ub Iwerks created Mickey Mouse to act as a replacement to his previous star Oswald the Lucky Rabbit. But Mickey could not fill the void alone. Among the few consistent character traits Oswald had developed before moving on to Universal Studios was his near-constant pursuit of potential sweethearts. So for Mickey to have a chance to emulate his predecessor at flirting, someone had to replace Oswald’s many love interests. This replacement to Miss Rabbit, Miss Cottontail, Fanny and an uncertain number of unnamed nurses and dancers was to become Minnie Mouse.

Minnie was designed in the fashion of a “flapper” girl. She was so probably intended to follow the trends of then-modern youth culture, such as liking the color red, in an effort to add to her audience appeal. Her main outfit usually included a feminine bowler hat with a daisy sticking out of it, white gloves and a short dress. In the 1929 cartoon The Karnival Kid it was also revealed that she wears black stockings. Her shoes are probably her most distinctive article of clothing. For comedic effect, she wears over-sized high heeled pumps that are too big for her feet. Her heels often slip out of her shoes, and she even loses her shoes completely in The Gallopin’ Gaucho. When she walked or danced, the clip clop of her large pumps were usually heard clearly and often went with the rhythm of the music that was played in the background. Along with Mickey, she was redesigned in the 1940s. Her hat was replaced with a large bow, and bows were added to her shoes as well. Her eyes were also given more detail. Throughout the forties and fifties, her look and personality became more conservative. This can be attributed to the fact that, as a result of The Great Depression and World War II, the culture of the USA had become more conservative, and the flapper girl style was falling out of fashion.
Minnie first appeared in Plane Crazy.

Minnie is invited to join Mickey in the first flight of his aircraft. She accepts the invitation but not his request for a kiss in mid-flight. Mickey eventually forces Minnie into a kiss but this only results in her parachuting out of the plane. This first film depicted Minnie as somewhat resistant to the demanding affection of her potential boyfriend and capable of escaping his grasp.